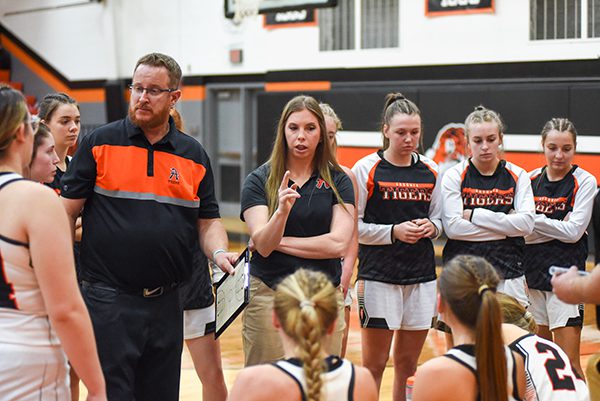 ANSONIA – The Dixie Greyhounds on the strength of a strong 1st quarter and the play of junior forward Sierra Brinson jumped on top of Ansonia 23-7.

“We came out, executed the game plan right down to the tee slowing the ball down and doing what we had to do to get buckets and of course Sierra was a big part of that,” first year Dixie coach Andy Blevins said.

But after spotting Dixie a 16-point lead in the 1st quarter the Tigers stepped up their offense by getting some easy buckets in the open floor spearheaded by their defense.

“We were a little bit on our heels to start the game, but we started to ramp up the ball pressure in our man-to-man defense and getting into the passing lanes.  We like to run with the ball and get some offense off our defense,” said Ansonia interim coach Catey Fischer.

Bailey Schmitt scored on consecutive lay-ups and had 8 in the 1st half as the Tigers tried to keep pace with Dixie.

In the 3rd quarter the Tigers applied more ball pressure out front and denied touches early on to Brinson in turn frustrating Dixie allowing them to make a run.

“We needed to put a little bit more size on Brinson and #14 rose to the challenge allowing us to get a little run going to start the 3rd quarter,” Fischer stated.

Ansonia was able to mount a charge closing the gap to 31-21 … but Dixie was finally able to get the ball to Brinson despite being double teamed she scored three straight trips including two and one’s as the Greyhounds expanded their lead out to 43-23 at the end of the 3rd quarter.

“Obviously, the way we coach or the way I teach is everybody’s always going to respond because basketball is a game of runs and they made a couple of runs and we got to be able to answer that And I think we did a pretty good job of it,” Blevins stated.

On this night it was Dixie standing tall at the end behind the 35 points by Brinson winning the game 59-36.

“I really like the way Sierra played tonight she does so much more than score and when teams are focused on her she is able to get others involved and they are starting to get some confidence, these girls are on the brink of being very successful,” Blevins concluded.

It was the 1st win for Blevins at Dixie and the first for the team this year.  They improve to 1-4 overall and 1-1 in the WOAC and will at Brookville on Saturday.

For Ansonia it’s been a tough few days none having to do with the team who showed fire and fight in their effort against the Greyhounds.

“I like our kids fight and positive attitude they didn’t back down … hats off to Dixie & Brinson, I mean, she is a beast inside and can’t give them enough credit.  Obviously we saw things tonight we need to work on. But again, attitude and effort are there, and we are trying to change the culture of basketball here at Ansonia. We’re trying to go with a more fast-paced style of game because size isn’t on our side and I excited about the outlook from these girls,” Fischer concluded.

Despite spotting the Greyhounds a large lead they Tigers can take a positive away from the game by playing even the remainder of the game.

Ansonia got 17 points from Bailey Schmit to lead the way, as the Tigers fall to 0-3 overall and 0-2 in league play.  They are back in action Tuesday hosting Newton. 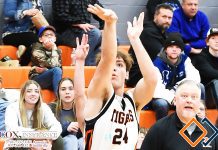 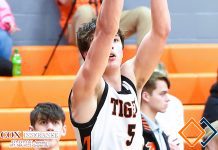